Washington [US], April 7 : The makers of Angelina Jolie starrer action-thriller 'Those Who Wish Me Dead' on Wednesday dropped a gripping trailer of the film that sees Angelina, an elite firefighter, turning into a lifesaver who leaves no stone unturned to rescue a traumatised 12-year-old boy.
Warner Bros. dropped the trailer on Instagram and wrote, "Those Who Wish Me Dead - Official Trailer. See Angelina Jolie, @NicholasHoult, @jonnybernthal, @finn_little_official & @TylerPerry in #Those Who Wish Me Dead Movie. In theatres and streaming on @HBOMax May 2021." 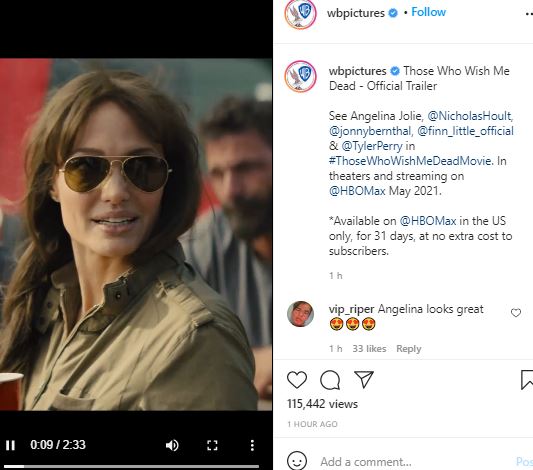 The two-minute thirty-three-second trailer features smoke jumper Hannah (Angelina), who is one of the expert firefighters trained to parachute into ablaze. As the trailer progresses, it sees Hannah entering into the woods and moving into an isolated fire tower. Hannah is a smokejumper still reeling from the loss of three lives she failed to save from a fire.
The trailer then shows Hannah, who is seeped into introspection, and shortly after one fine day, she encounters a traumatised preteen 12-year-old Connor (Finn Little). The boy seems to be running from two assassins (Nicholas Hoult and Aidan Gillen), who killed his father.
The video also showcases shots of a raging fire in the forest, Hannah and Connor have to outrun both their hunters and the wildfire raging around them. The trailer ends with Hannah performing daredevil stunts and she leaves no stones unturned to save Connor.
The movie is directed by Oscar Nominee Taylor Sheridan.
Sheridan directed the film from a screenplay by Michael Koryta and Charles Leavitt and Sheridan, based on the eponymous book by Koryta. StevenZaillian, Garrett Basch, Aaron L. Gilbert, Kevin Turen and Sheridan produced, with StevenThibault, Ashley Levinson, Andria Spring, Jason Cloth, Richard McConnell, Kathryn Dean, Michael Friedman, Daria Cercek and Celia Khong are executive producers.
The film is set for release in cinemas in India in May this year.